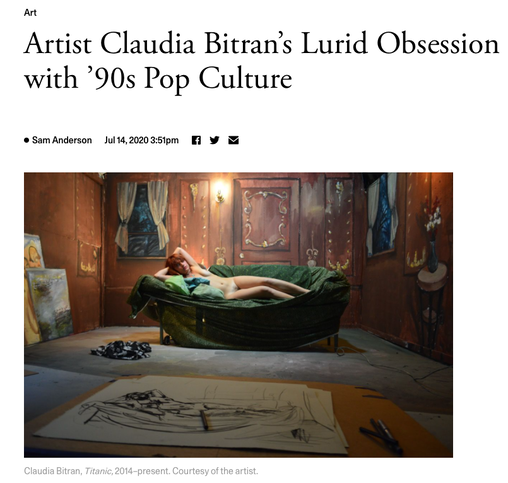 Separate Sundays Pioneer Works
July 2020Separate Sundays is a continuation of our monthly collaboration with 8ball Radio, who we partner with for  “Live from Pioneer Works” every Second Sunday. In this isolation iteration, we will explore performances, activations, and residencies that would’ve happened on-site, off-site, or in parallel dimensions during our monthly Second Sundays program.Hosted by our Director of Music, Justin Frye, tune in right here or at 8ballradio.nyc to listen at 6PM ET every second Sunday of each month. 6PM-9PM Separate Sundays Radio Program Hosted by Justin Frye, featuring 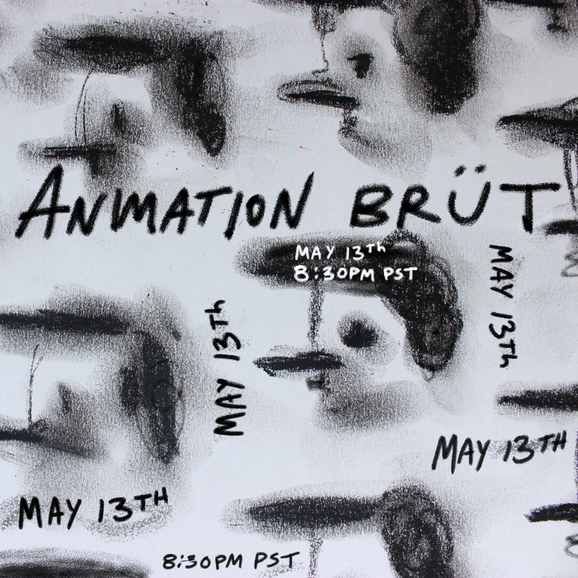 WELL NOW WTF?
Curated by Faith Holland, Lorna Mills and Wade Wallerstein Well Now WTF?
Online exhibition of more than 80 artists who have contributed GIFs and videos. The exhibition is hosted by Silicon Valet and designed by Kelani Nichole. 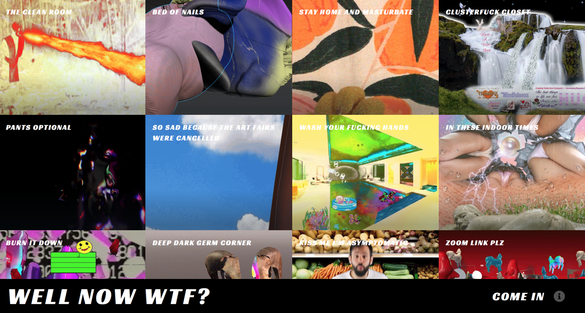 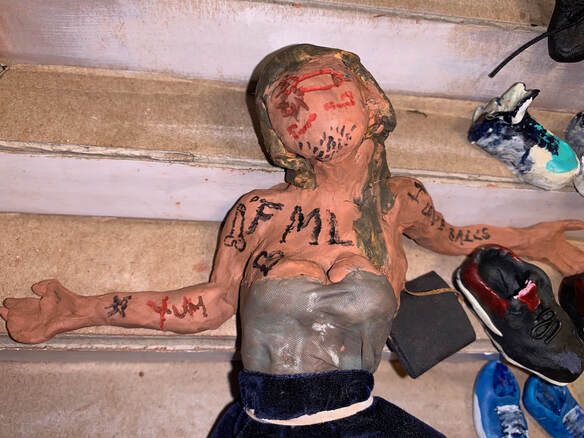 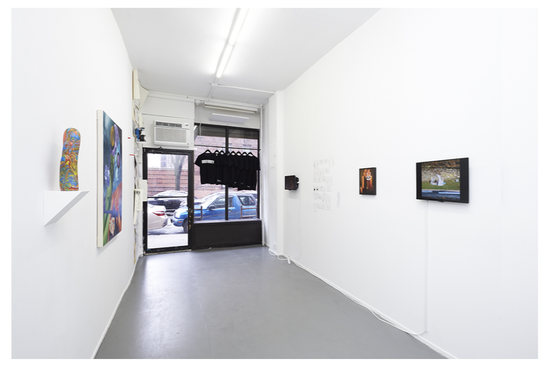 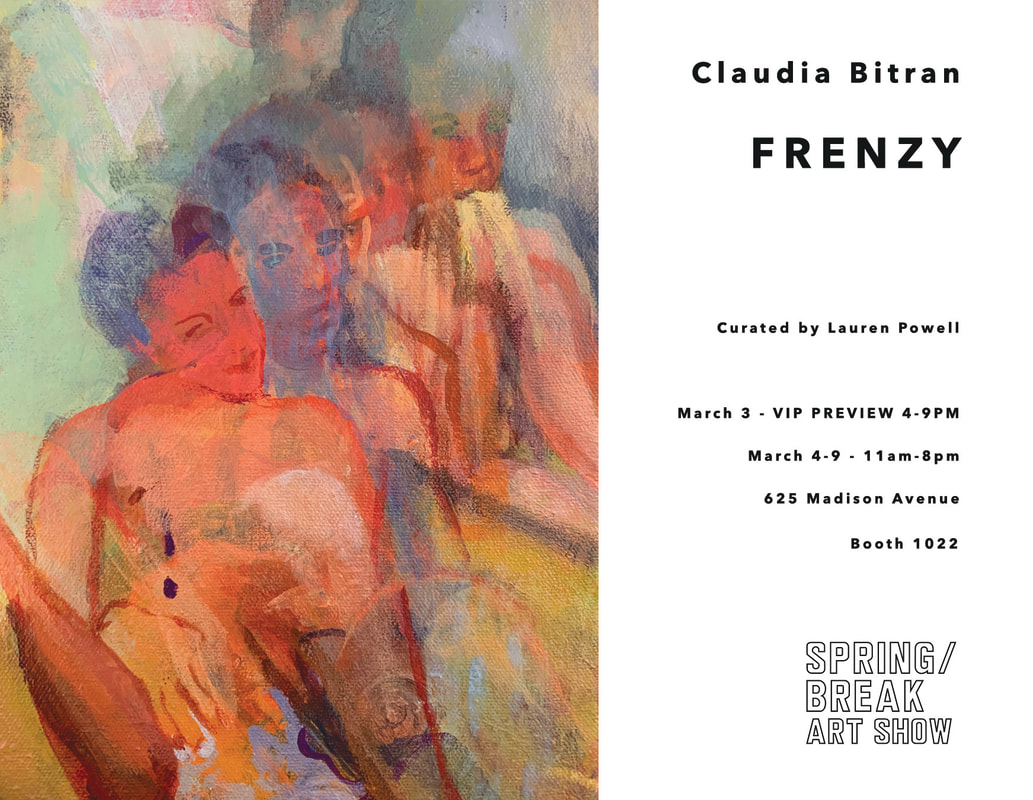 Claudia Bitran: FRENZY
curated by Lauren Powell
SPRING/BREAK Art Show 2020
Claudia Bitran is a multidisciplinary artist who works primarily in painting and video, most known for her Britney Spears impersonations and her ongoing shot-for-shot remake of Titanic. Her work stands somewhere between critique and devotional act, exploring the contradictory and seductive powers of capitalism by engaging and complicating the smooth transmission of its signs.
Compelled by the vast amount of viral videos of inebriated teenagers circulating online, Bitran started collecting and cataloging clips in an effort to break down and examine the paradoxical way in which we consume them. How do violence and near death experiences transform into humor for the masses? Why are we drawn to this kind of entertainment?
Bitran’s Fallen stop-motion painting animations depict anonymous female teenagers in euphoric and anxiety-inducing states of inebriation. The compositions, gestures, and pacing of the paintings emphasize the instability of the characters as they lose control over their vomiting, falling bodies. The stills are layered over each previous iteration producing a final painting where the trauma of the actions in the animations is covered, yet still present. In Frenzy , Bitran further explores the tipping point between euphoria and near death experiences.
By painting each frame of these found videos, she is expanding time and analyzing each microsecond of the actions. The artist employs a wide range of painting strategies that both glorify and petrify the vulgarity of the actions, resulting in surfaces that are affected, thick and loaded with the poses of the young disoriented bodies. The final paintings are a ghostly metamorphosis of the source material, while the animations serve as documentation of the painting’s evolving stages. The process is both empathetic, and at the same time pulls back the curtain to reveal the invisible horror behind the subject matter.
As viewers experience these entertaining, disturbing, plastic, euphoric and dark animations, we hope they raise questions about the nature of our voracious habits online. The TVs stand as purgatory cages in which the anonymous characters are trapped on an infinite loop, constantly devoured over and over again. The tense disconnect between the viral videos and the viewers reinforces the numbness of our consumption, and the teenage fall acts as metaphor for the constant failure of neo-liberal systems of exchange. Will the aftermath of showing these painting animations reinforce this sharing cycle?
Bitran’s Spring Break solo booth, open to the Public between March 4th and 9th, is a sequel to her video-animation works that are on display at Postmasters Gallery until March 7th, 2020. Both shows are curated by Lauren Powell, independent curator and art advisor. 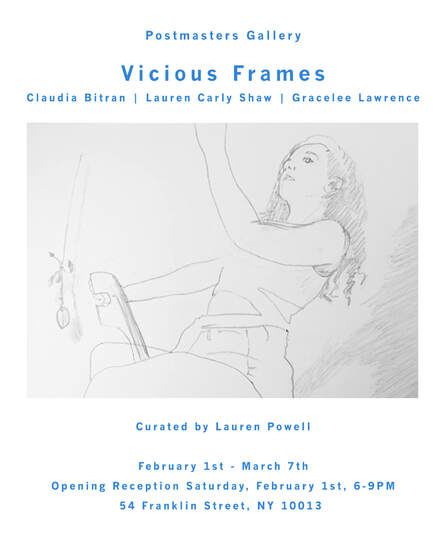 VICIOUS FRAMES curated by Lauren Powell features NY-based multimedia artists Claudia Bitran, Lauren Carly Shaw, and Gracelee Lawrence. The show will be on view at Postmasters Gallery from February 1, 2020 to March 7, 2020, with an opening reception taking place from 6-8pm on Saturday, February 1st.

The works in this exhibition take a deep dive into media addiction: one that explores, celebrates and denounces the voracious consuming of others; another that examines and stages the notion of the construction of self; and one that reflects upon the isolation produced by our online existence.

Bitran’s three stop motion animations (one claymation, one drawing animation and one painting animation) are inspired by viral videos of epic fails and chaotic humiliations. Two of them depict anonymous female teenagers in euphoric states of inebriation, while a third one presents animals and babies falling in slow motion. The rendering, pacing, and gestures of the various materialities emphasize the instability of the characters as they lose control over their vomiting, falling bodies. Bitran proposes a nuanced, deeper and expressive perspective of these over-shared videos, by exploring trauma, humor and cruelty.

Shaw’s I, Me, Mine exhibits a female version of Narcissus that is lounging in a surreal hand-crafted diorama while pointing at herself. The subtly animated character can only be seen by the viewer through the screen of an iPad, presenting two simultaneous realities that investigate prevalent social obsessions with vanity: one tangible, one virtual. In both instances, she is surrounded by a number of humanoid objects and busts that gaze eternally at themselves and at their doppelgängers.

Lawrence’s sculptures, relying equally on digital fabrication and hand augmentation, examine the relationship between food, the body, and technology at an exaggerated scale. A physical origin point is isolated and translated to digital space, often influenced by what is found in our ever more real and familiar internet world. As the barriers between digital and physical spaces dissolve, our perception of reality also shifts, and the compartmentalization encouraged in digital space leads to a new world less and less concerned with the human touch, yet Lawrence’s work dips into both territories with equal aplomb.

Not without humor nor skepticism, each artist presents pieces that confront our current reality, one driven by the insidious power of social media and our contemporary narcissism. For Bitran, the frame becomes a vessel of tragedy, for Shaw an addictive ego-system, and for Lawrence, an isolated ‘experienced’ existence void of physical sensations. VICIOUS FRAMES highlights the habits and addictions that affect our online activity, offering a deeper look into our collective alienation.
​ 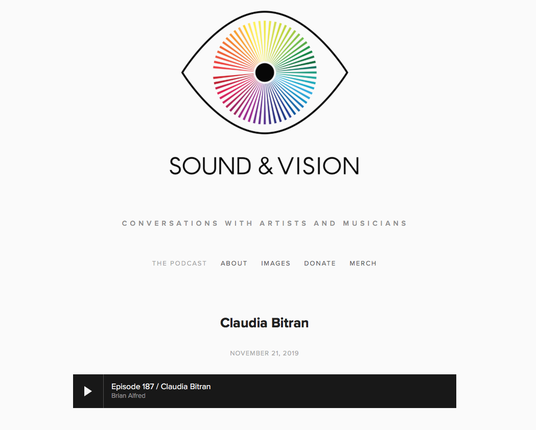 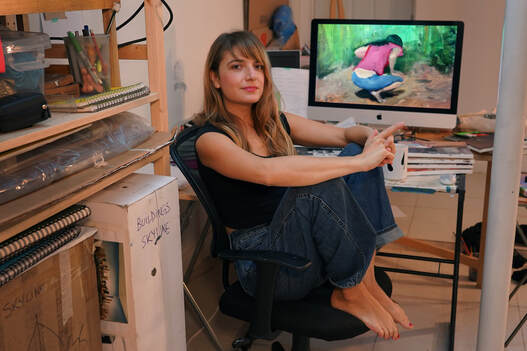 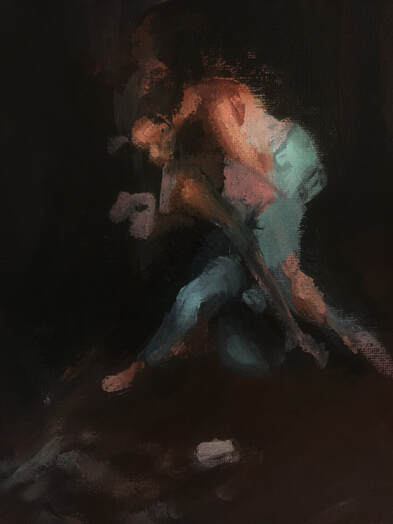 Cindy Rucker Gallery is pleased to present Trittbrettfahrer, featuring works by multidisciplinary artists Claudia Bitran, Howard Schwartzberg, and Rusty Shackleford. Taking the German word for riding a train surreptitiously as its title, the exhibition gathers artists who work in the medium of the painting, yet reshape it by incorporating traits of neighboring disciplines, such as sculpture, video, photography, and installation. As if turning painting inside out,

Howard Schwartzberg uses the conventional elements of stretcher and canvas to seemingly envelop large masses of paint. His pseudo-containers give way to hybrid objects, the volume and weight of which place them on the verge between painting and sculpture. Rather than creating spatial illusion through flat canvases, their flatness resides on the surfaces of their fluid bodies, the angles of which suggest that they may overflow.

Claudia Bitran’s stop-motion animations depict anonymous teenagers in euphoric and anxious states of inebriation. Taking stills from videos found on social media, the bright chromatic composition in which Bitran reproduces these clips provides an unbiased channel into youth culture, and the brushwork emphasizes the instability of the characters; as they lose control over their bodies, the figures morph in and out of abstraction.

​Rusty Shackleford’s multi-layered collages only display minute sections of what were once compositions of paint on paper, yet are enlarged to a scale that engulfs a section of the exhibition space. The prominent texture contained by the digital images elude the viewer, as their materiality consists of no more than a flat surface—a record of an earlier stage of the artwork—which has been warped and distorted. Paradoxically, the work’s lack of tangibility draws us to contemplate the distinct stages of its physical and temporal construction, despite the fact that these multiple layers have been compressed into data.
​
By navigating different avenues of formal research, the artists in Trittbrettfahrer reaffirm the elastic nature of painting. Whether that be conceptual, technological, or material, they each occupy the medium in contemporary modes of production and prove that the vulnerabilities and mutations they identify in people, images, and objects are also intrinsic to the discipline in which they intersect.
Group Show​
Vitrina Lab: Chilean Artists,
Miami, Opening May 9th, 2019
Patty Gone writes about "Intros" by Claudia Bitran in Off Brand Video section at Believer Magazine 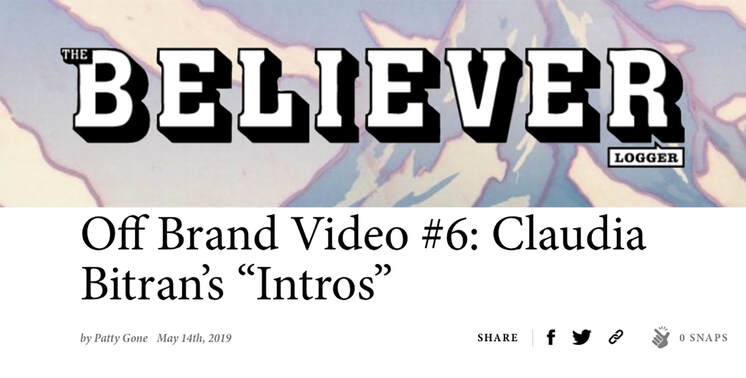 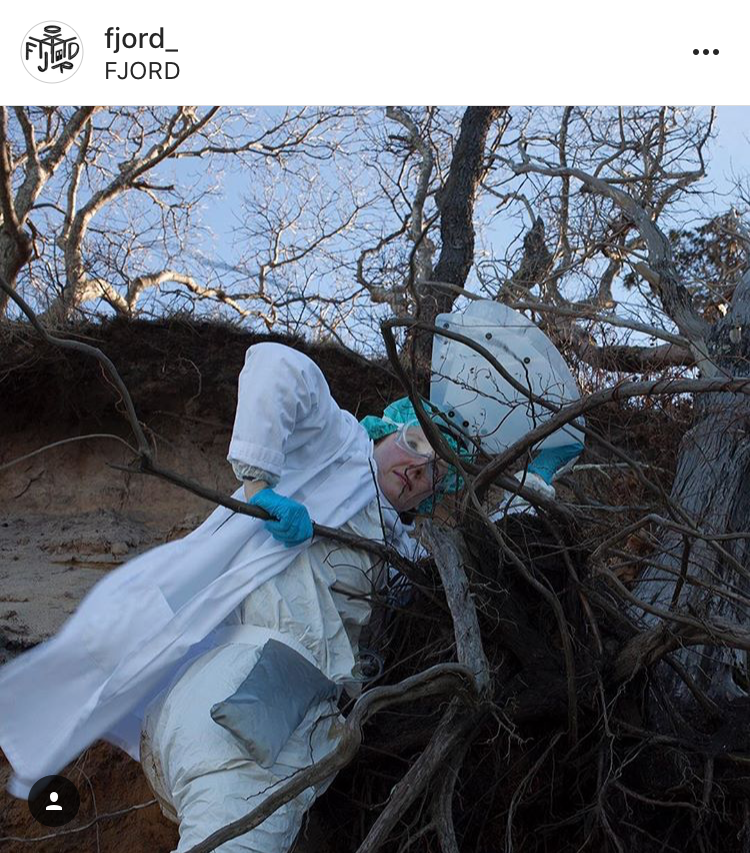 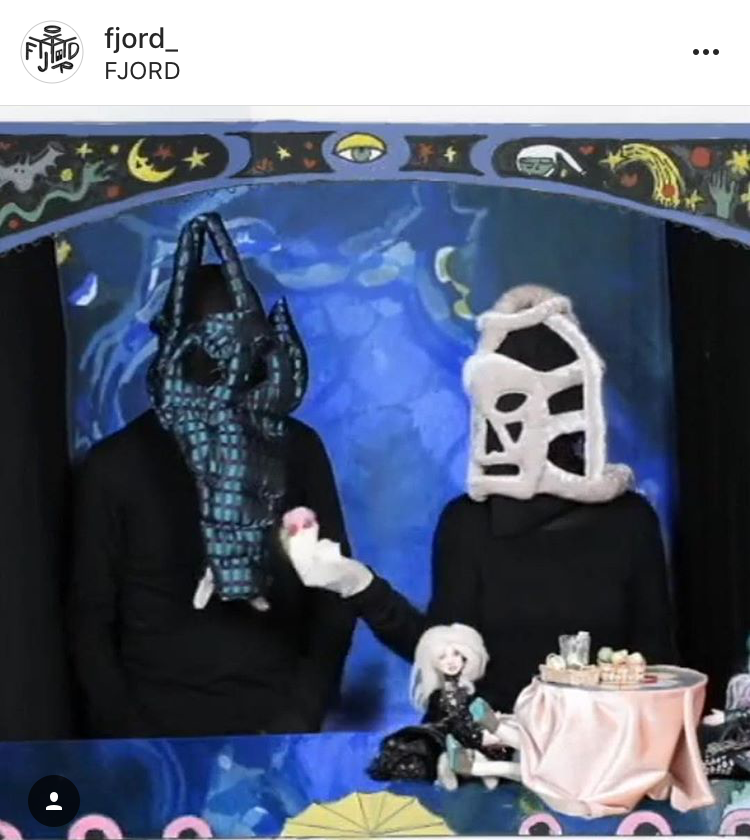 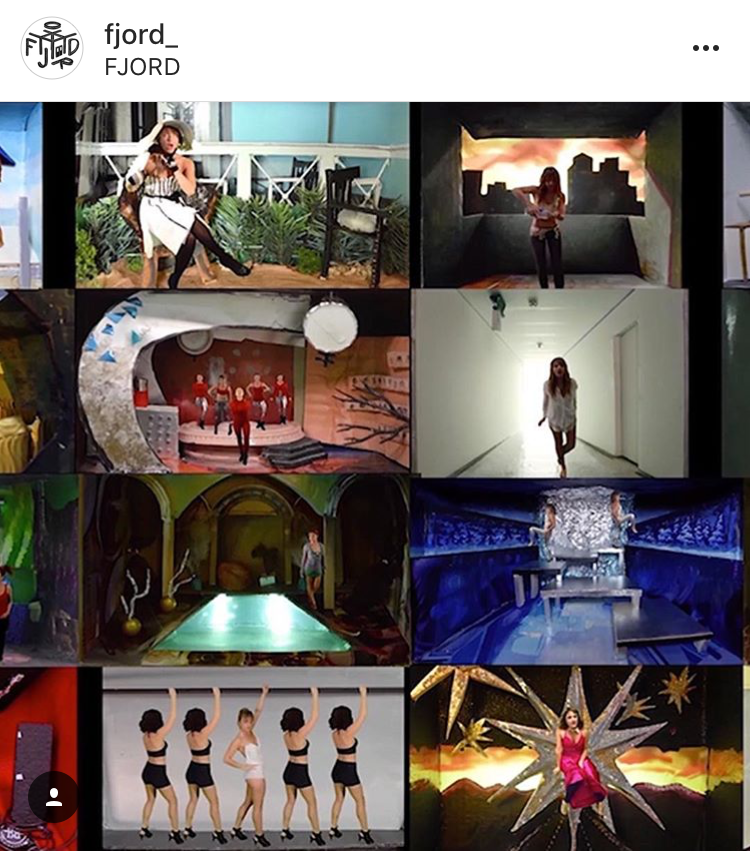 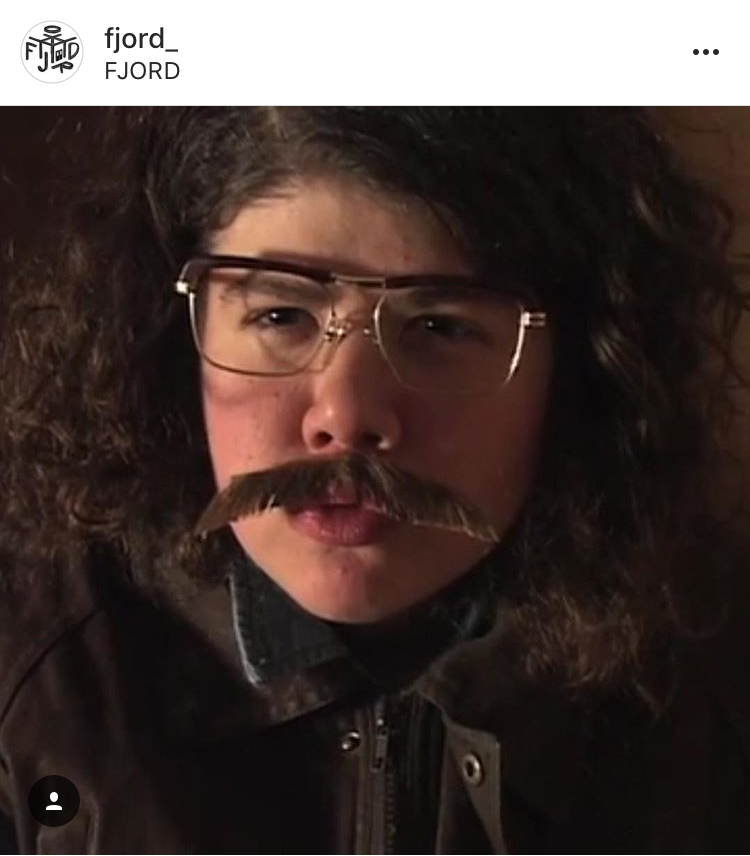 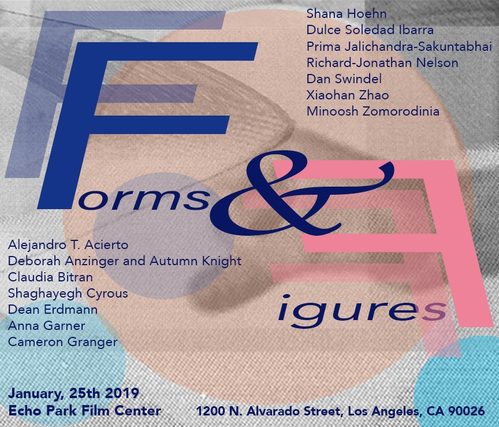 ​Martin Art Gallery at Muhlenberg College is pleased to present “Filters and dolphin sounds”, a solo exhibition by Claudia Bitran.
In this show the artist deepens her investigation into the semiotics of personal marketing and online sharing culture. She will present four new works: a series of backlit doodle drawings in light boxes representing instagram filters; paintings on panel depicting body fragments of young female influencers; a stop motion animation based on viral videos of animals and babies falling in slow motion; and interactive sound pieces that will submerge viewers into a mashup of fragments of today's pop hits. Collectively, the works identify and break down filters that are commonly used in online sharing dynamics. Bitran proposes a deeper look at the signs and mechanics of online sharing culture, bringing to light the real intentions behind certain types of posts and the figures of speech that connect them, as well as proposing some fictitious new ones.

TITANIC a deep Emotion by Claudia Bitran
Performance / Shoot
University of Michigan
​Oct 2018
For four years, New York-based multimedia artist Claudia Bitran has been reinterpreting Director James Cameron's film Titanic with an intentionally experimental shot-for-shot recreation. This dynamic long-term project has involved 500+ participants from 15 cities across Chile and the United States and — on October 24th — will be performed and filmed at the University of Michigan.
Stamps School of Art & Design Dressing Up + Down students have created elaborate costumes and wearable props re-imagined from the scene in which passengers are thrown into the frigid waters around the sinking ship. On Wednesday October 24, 9-11pm, DU&D students and members of the University of Michigan Synchronized Swimming will wear the costumes and re-create scenes from the film. The swimmers will perform a mash-up of choreography from their own routines and the original film. Claudia will direct and film this event, and will incorporate this scene in her larger film.
The University of Michigan community and the public are invited to attend the performance and filming on October 24, 9-11pm at Canham Natatorium - University of Michigan. Please join us for this event.
Thank you for support from the Witt Visiting Artist Program, Arts at Michigan, and University of Michigan Athletics.
College for Creative Studies, Detroit presents
a Screening of experimental videos  by visiting artist Claudia Bitran
Thursday October 25, 2018 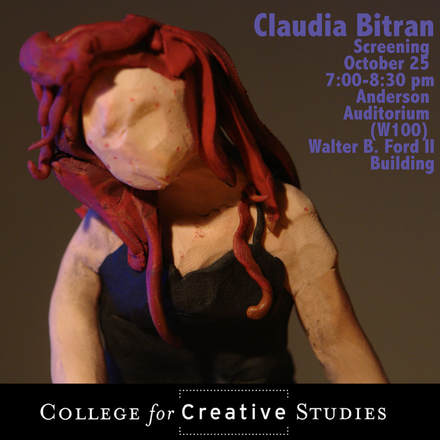 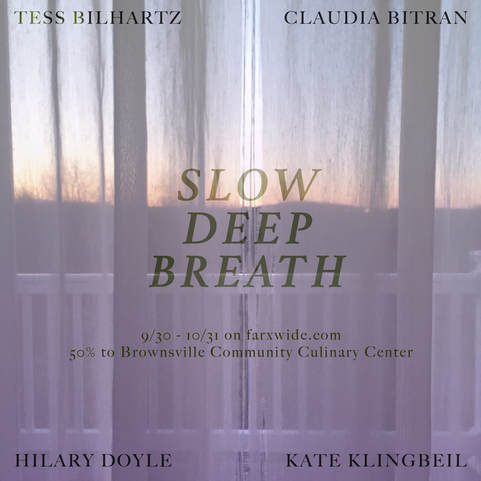 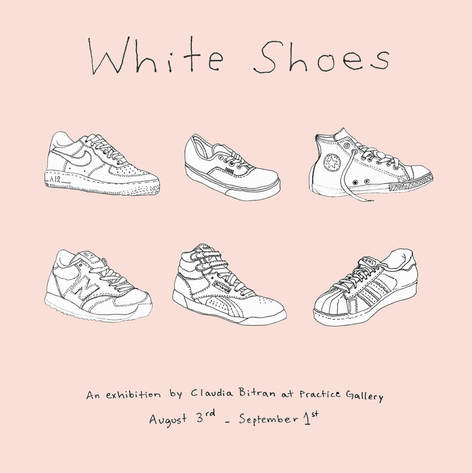 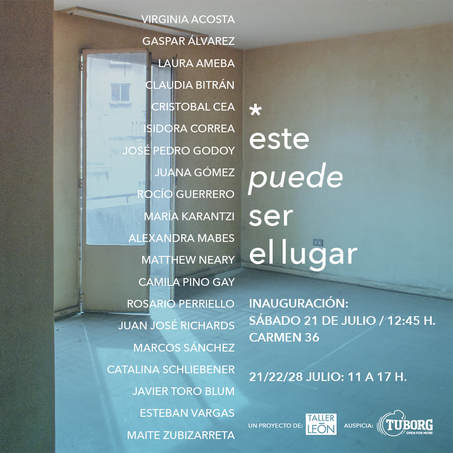 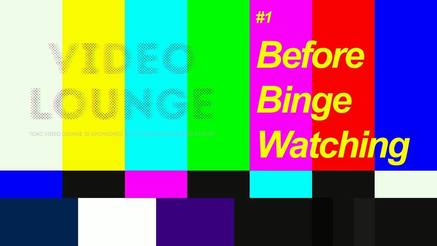 Television recalls a sense of nostalgia. We as viewers turn to contents on online media platforms, such as YouTube, Facebook or Netflix. Endless shows, series and movies await and on demand. TV as a telecommunication medium is gradually replaced by personal computers, smartphones or tablets, becoming an extension of the screen. It is, however, once the dominant tool to disseminate moving images and to construct daily visual experience. Through television screens and TV broadcast networks, ideology embedded in images and moving are made, transmitted, displayed and assimilated into a state of consciousness. In addition, TV programs are divided by time slot, forming a TV flow that allows viewers watching program after program, preparing the foundation for the upcoming age of binge watching. The 2018 Video Lounge Series 1: Before Binge Watching focuses on works that appropriate, mix and bricolage forms and visual elements commonly seen on TV. In these works, artists take a double role of being a spectator and a image maker. Would they eventually lead the ways of seeing to building a “imagined community” with the visible other, or force us to linger in a limbo with infinitely gawking? 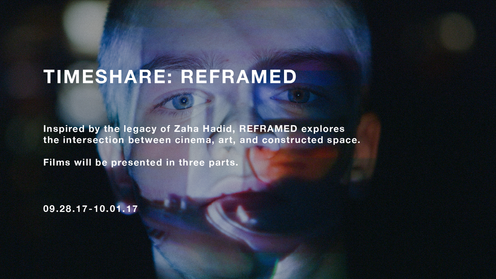 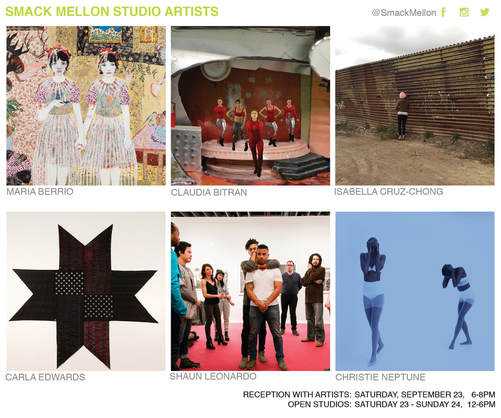 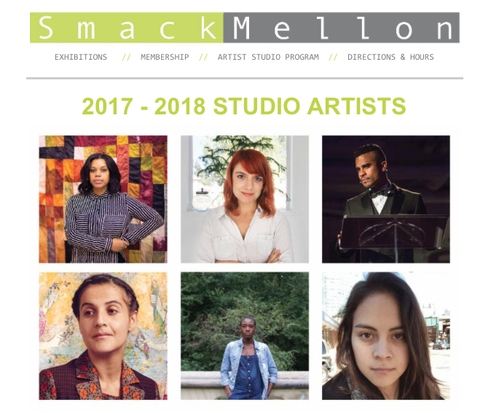 I met Britney in Vegas!
Click image to read more about how I won the Britney Spears Private Show Dance Challenge. 2017 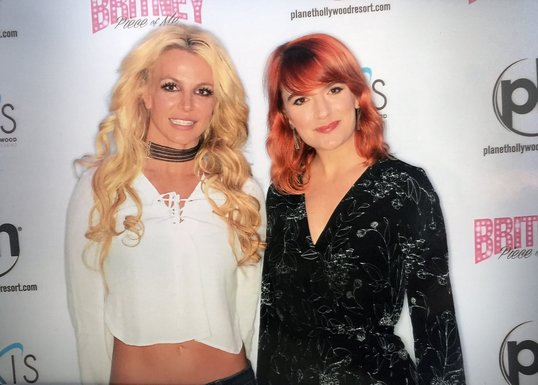 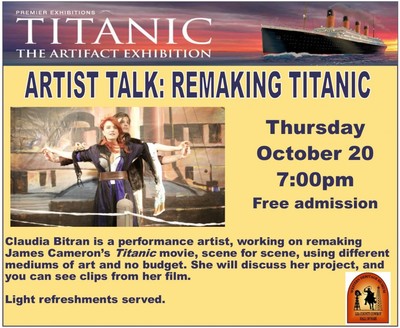 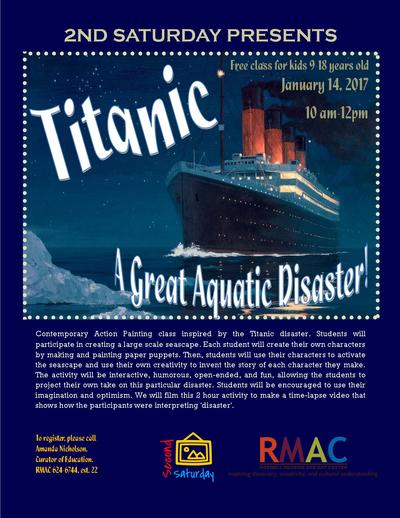 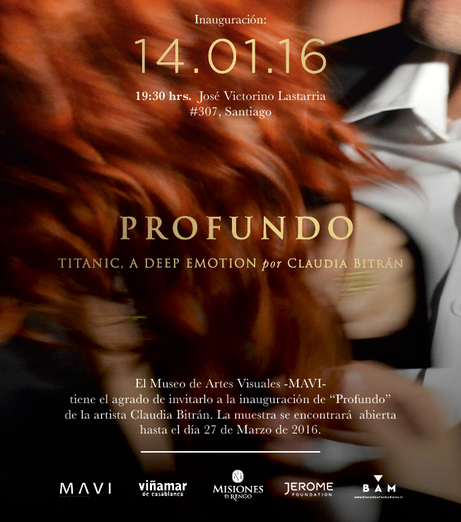